Every year, worldwide more than 200 stamps related to music are issued. The list of new issues published in the members-only-section of our website is updated several times per month. On January 20, 2022, Brazilian samba singer Elza Soares died in Rio de Janeiro at the age of 91. Born on June 23, 1930 in Rio de Janeiro, Elza Gomes da Conceição was one of the most important interpreters of samba. In 1953 she won a singing competition by the composer Ary Barroso and was subsequently engaged as a singer in an orchestra. She appeared as a musical and pop singer and worked for a radio station for several years. After the success of her first album, she was hired in 1960 for the television show Primeiro festival nacional de bossa nova, where she appeared regularly. She became internationally known, among other things, through her appearance at the World Cup in Santiago de Chile alongside Louis Armstrong. Her life story was the basis for the 2000 musical “Crioula” (“Creole”).
The video shows the artist performing on television in 1981.

There are so many topics and stories hidden in our stamp albums that never come to the public eye …
… because there is too little material to create an exhibit,
… because far too many collectors shy away from the effort of assembling an exhibit or
… because collectors don’t want to accept the strict rules of a jury.

We’ll put an end to that and show, …
… that you can tell a story with just 10 stamps.
… that no great effort is required to do this and
… that you can show what’s in our albums even without rules!

You need help ?
Here you’ll get some hint Visit to the Opera
Jörg Kiefer The Song of the Germans (National Anthem)
Wolfgang Andrée

How do you Play
a Recorder ?
Peter Lang

Times of upheaval towards the end of romanticism
Rudolf Wagner After Corona – What we can
look forward to again
Harald Schönherr

H.C. Andersen and his Fairy Tales in Music
Karl-Heinz Büdding

Hansel and Gretel on
the opera stage
Karl-Heinz Büdding Hohner, Seydel, Köstler, Koch
and all the others
Norbert Amrein

Every year, worldwide more than 200 stamps related to music are issued. The list of new issues published in the members-only-section of our website is updated several times per month. Rosa Ponselle (actually Rosa Melba Ponzillo) appeared from 1915 with her older sister Carmela as the Ponzillo Sisters in New York cinemas and cabarets. The impresario William Thorner recognized her talent and brought her into contact with the Metropolitan Opera, where she was promoted by Enrico Caruso. In 1918 she made her stage debut alongside Caruso as Leonore in “La forza del destino” by Giuseppe Verdi. The performance made Ponselle famous overnight. From 1918 to 1937 she was part of the Met ensemble for 19 seasons in a row.

Rosa Ponselle is one of the most outstanding coloratura sopranos in opera history. Her repertoire included 23 roles in operas by Mascagni, Weber, Rossini, Ponchielli, Spontini, Mozart and Verdi. Her star role, however, was the title role in Vincenzo Bellini’s Norma. Her last role at the Met was Georges Bizet’s Carmen.
After the end of her active career, she took on a managerial position at the newly founded Baltimore Civic Opera. There she also gave singing lessons. One of her students was Plácido Domingo.


The video shows Rosa Ponselle as Carmen in 1936 during test shoots in the MGM film studios. Austria 23.2.2004
José Carreras
The Catalan opera singer Josep Maria Carreras i Coll (Spanish form: José Carreras) was born on December 5, 1946 in Barcelona. He will celebrate his 75th birthday in December 2021.

In 1963 Carreras broke off his chemistry studies and began to study singing at the Conservatori Superior de Música in Barcelona. In 1970 he made his debut at the Gran Teatre del Liceu there in Verdi’s „Nabucco“.
After winning the Verdi competition in Busseto, he received an engagement at the Madrid Opera in 1971 and made his debut with Montserrat Caballé in London in Donizetti’s “Maria Stuarda” that same year. From 1972, numerous guest appearances took him to the opera houses in New York, Buenos Aires, Chicago, London, Vienna and Milan. After his international breakthrough as a lyric tenor, other invitations followed, including to Salzburg, Hamburg, Munich, Brussels, Tokyo and San Francisco. Since appearing in the 1990 Football World Cup, he has formed the vocal trio “The Three Tenors” with Plácido Domingo and Luciano Pavarotti.
In May 2009 Carreras announced his retirement from the opera stage, but continued to give concerts and celebrated a triumphant comeback on the opera stage in Bilbao in 2014 with the world premiere of Christian Kolonovits’ opera “El Juez”. José Carreras, one of the outstanding tenors of the second half of the 20th century, celebrated his departure from the Vienna State Opera at a gala in September 2021.


The video shows José Carreras with Cavaradossi’s aria “E lucevan le stelle” from Puccini’s opera “Tosca”. The recording was made at a concert of the “Three Tenors” on July 16, 1994 in Los Angeles. Zubin Mehta conducts the Los Angeles Philharmonic Orchestra and the L.A. Music Center Opera Chorus.

At the height of his career, Carreras fell ill with leukemia in 1987. Despite a bad prognosis, he was able to resume his singing career after a bone marrow transplant, which was hardly widespread at the time. Out of gratitude for the medical help, he founded the José Carreras Leukemia Foundation in 1988, for which he has raised over 200 million euros with benefit galas over the past twenty years. Josip Bulić, Sales Director of HP Mostar, presents the Yehudi Menuhin Trophy to Manlio Napoli, the designer of the most popular music stamp of 2020.

The video shows an excerpt from a clip on the philately advertising of the Croatian Post in Mostar. Tibbett studied singing in Los Angeles and began his career as a concert singer. In 1921 he failed at an audition at the Metropolitan
Opera. In 1923 he finally received a contract for the 1923/24 season. He made his debut in the role of Lowitzki in “Boris Godunow” alongside Fyodor Chalyapin in the title role. A week later he was back on stage as Valentin in Gounod’s “Faust” next to Chaliapin. It was an indescribable success for the young singer, who then received a contract extension for another season and finally belonged to the MET ensemble until 1950. He played 50 different roles in 396 performances.


The video shows Lawrence Tibbett as Escamillo in Georges Bizet’s opera “Carmen”, in which he is also depicted on the stamp. The excerpt comes from Richard Boleslawski’s 1935 film “Metropilitan” with Virginia Bruce as Carmen. “Metropilitan” was the first film produced by the newly formed 20th Century Fox Film Studios after the merger of Twentieth Century Pictures and Fox Film Corporation.
Georges Brassens
The French poet, writer and chansonnier Georges Brassens was born in Sète on October 22, 1921. He died on October 29, 1981 in Saint-Gély-du-Fesc near Montpellier. October 2021 will mark the 100th anniversary of his birthday and the 40th anniversary of his death. On September 9, 1971 the album “Imagine” by John Lennon (1940-1980) was released.
The title song is still one of his most famous songs to this day. The song was a statement against the Vietnam War at the time, but for many it has become a kind of ultimate peace hymn and an ode to idealism.
“Imagine that there was nothing more worth waging war for …” 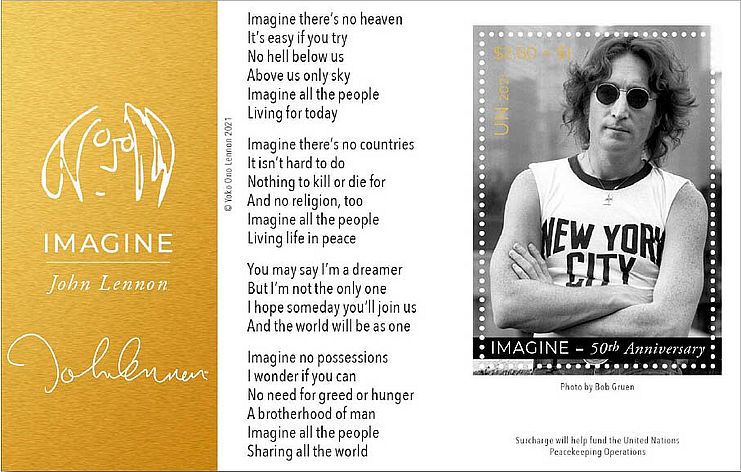